The Hunstable Electric Turbine can produce up to three times the torque of any other motor.

Enter Linear Labs, which says it has a motor to beat all. The company declares its Hunstable Electric Turbine (HET), perhaps with unintentional shades of Ayn Rand, “The Motor of the World.”

The company told Autoblog, “The defining characteristic of this motor [is that] at very low RPMs … [for] the same size, same weight, same volume, and the same amount of input energy into the motor, we will always produce – at a minimum, sometimes more, but at a minimum – two to three times the torque output of any electric motor in the world, and it does this at high efficiency throughout the torque and speed range.”

“Hunstable” comes from the two principals: Fred Hunstable, an engineer who spent years designing the electrical infrastructure for nuclear power plants in the United States; and Brad Hunstable, Fred’s son and an ex-tech entrepreneur who helped found the streaming service Ustream, sold to IBM in 2016 for $150 million.

Linear Labs began as a father-son project to create a linear generator surrounding the shaft of an old-fashioned windmill that would provide reliable power (as well as clean water) to impoverished communities. The challenge was designing a generator able to produce sufficient power from the shaft’s low-speed, high-torque reciprocating movement. Brad said his father cracked the code about four years ago, resulting in “a linear generator that produced massive amounts of electricity from a slow-moving windmill.” What’s more, the breakthrough was modular, leading to a family of motors that has been issued 25 patents so far. 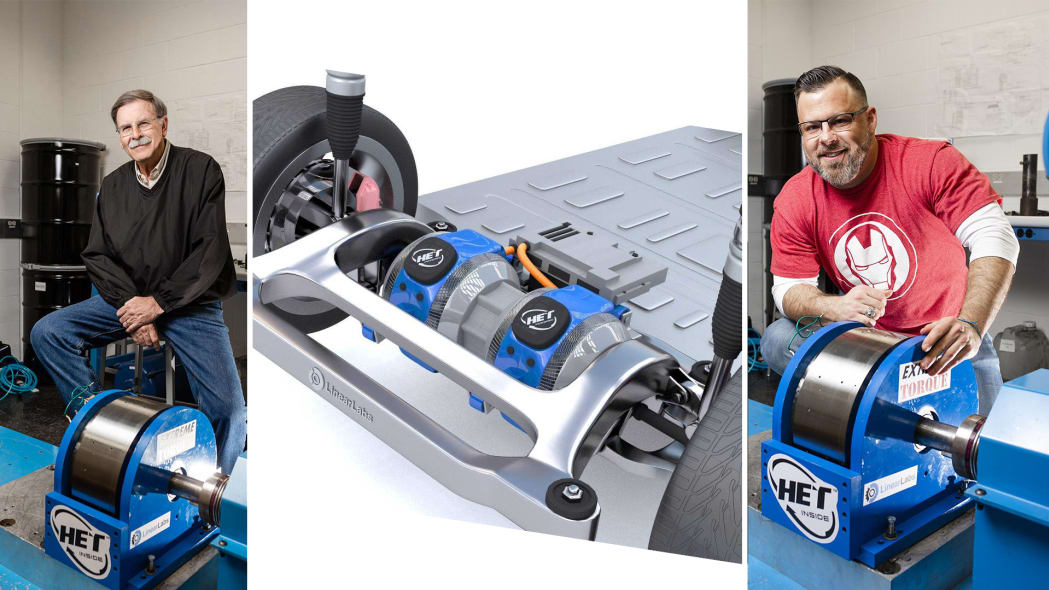 What is the Hunstable Electric Turbine?

Electric motors are well into their second century, having barely changed since Nikola Tesla patented his innovations with the modern three-phase, four-pole induction motor between 1886 and 1889. While all motors consist of similar fundamental components – copper wire coils known as windings, and magnets – the way in which those components interact is slightly different. In a radial flux motor, one component spins within the other – imagine a small can spinning inside a larger stationary one. In an axial flux design, the components spin next to each other, like two flywheels sandwiching a central, stationary plate.

Typically, the way to create more torque is to send more current into a motor or build a larger motor. Linear Labs has found another way: by combining axial and radial flux designs in a single motor. 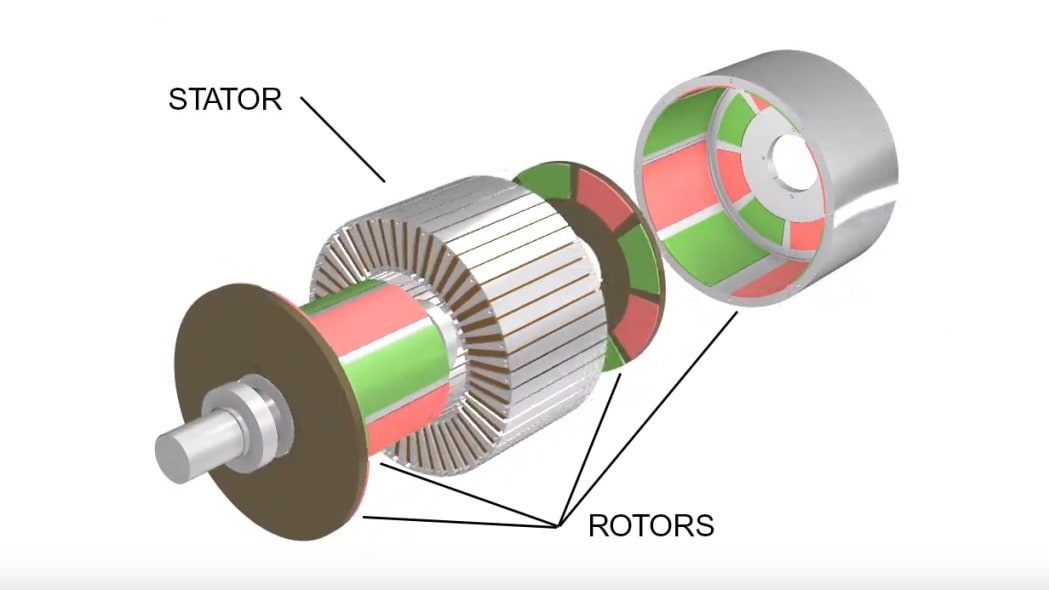 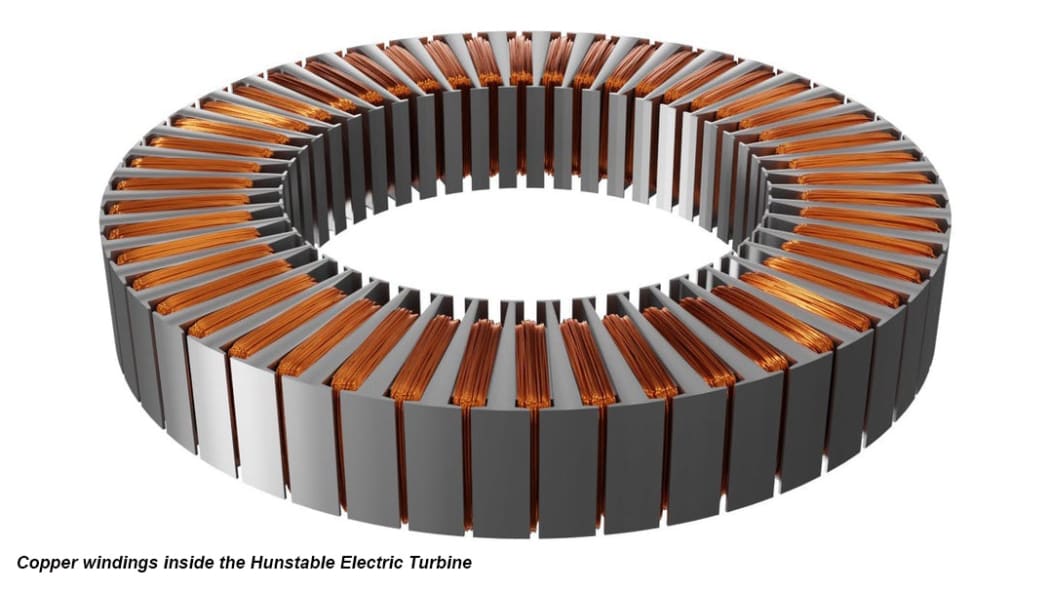 The HET is four rotors surrounding a stator. A central rotor spins inside a stator, creating one source of flux. A second rotor spins outside the stator, creating a second source of flux. Two additional rotors lie at the left and right ends of the stator, essentially forming an AF motor. That’s two more sources of flux, making four in total. It’s essentially two concentric radial motors bookended by two axial ones.

Linear Labs says all the HET generates all torque in the direction of rotor motion. In a promotional video, Fred Hunstable said, “We call it circumferential flux, sort of like a torque tunnel.”

Generating more torque in a given volume, and having all of that torque move in the direction of rotor motion, is how the Hunstables claim, “two to three times the torque for that size envelope compared to any other motor out there. It doesn’t matter what kind [of motor] it is, we will always out-produce it.”

Furthermore, by using discrete rectangular coils inset into the stator poles, the HET needs 30% less copper than a motor of similar size. The design also eliminates end windings – lengths of copper that lie outside the stator in a typical motor, generating wasted magnetic field and heat. 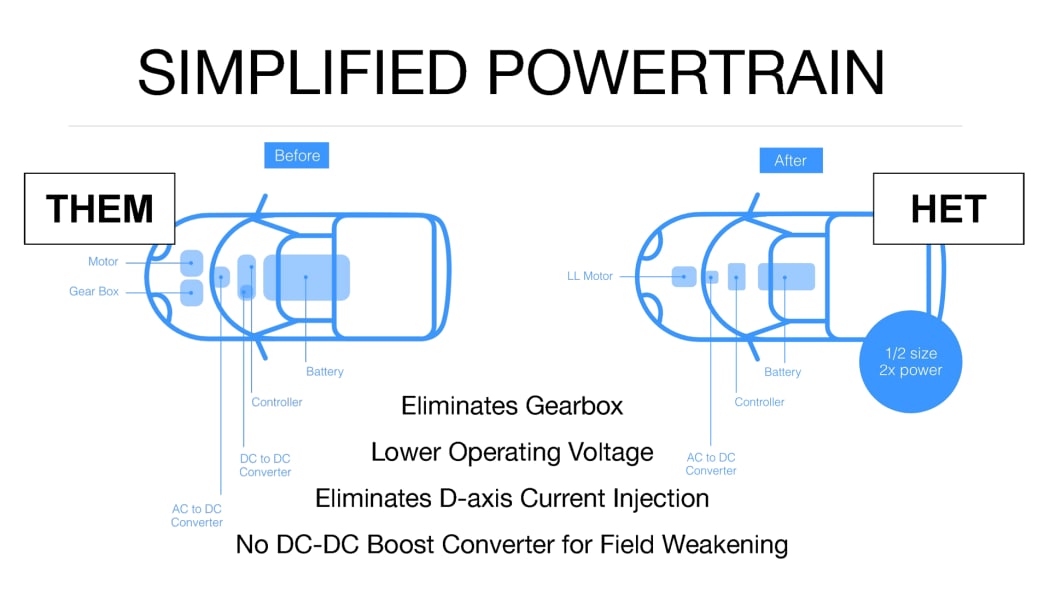 What the HET could mean for future electric cars

So far, Linear Labs has inked deals with a scooter maker, with Swedish electric drive system firm Abtery, and with an unnamed firm designing a hypercar to be released within two years, utilizing four HETs. However, Brad Hunstable thinks the HET could have applications in the electric vehicle space, since the HET’s torque comes at RPMs that match the end use. Current EV motors spin much faster than the wheels, so most EVs use a reduction gear to connect a motor spinning at several thousand RPM with wheels spinning at anywhere from one to perhaps 1,800 RPM. If the HET generates the necessary torque at RPMs that match wheel speed, a carmaker could theoretically discard the reduction gear, reducing weight and improving powertrain efficiency.

Brad said testing has shown the HET in direct-drive configuration works in applications normally served by a 6:1 reduction gearbox, and it’s possible that the ratio is even higher. The downstream effects could be significant, according to Hunstable. That weight savings – the lower operating speed of the HET means fewer and lighter electronics, the company says – and efficiency gain could be used to reduce the size of the battery and thus the weight of the vehicle, saving cash and letting the manufacturer use lighter-duty components – perhaps enough to make a significant difference to the bottom line, Hunstable thinks.

The HET can also take over the role of a component known as a DC/DC boost converter, used in some EVs in situations in which the vehicle needs to trade torque for horsepower, such as during hard acceleration at highway speeds. By doing so, they use additional energy that can’t be put towards range. In general terms, EVs that emphasize performance use a boost converter, like the Tesla Model S, while ones that emphasize efficiency don’t, like the Hyundai Ioniq EV. (It should be noted that some hybrids, such as Toyota and Lexus hybrids, utilize boost converters to goose acceleration.)

Linear Labs says the HET does the job of the DC/DC boost converter on its own by changing the relative position of one or more of its four rotors, analogous to the variable cam system on an ICE, altering position depending on load needs. Combining the extra torque, reduced weight and complexity possible without a gearbox or boost converter, and lighter ancillaries, Linear Labs claims the HET could increase range by 10%. 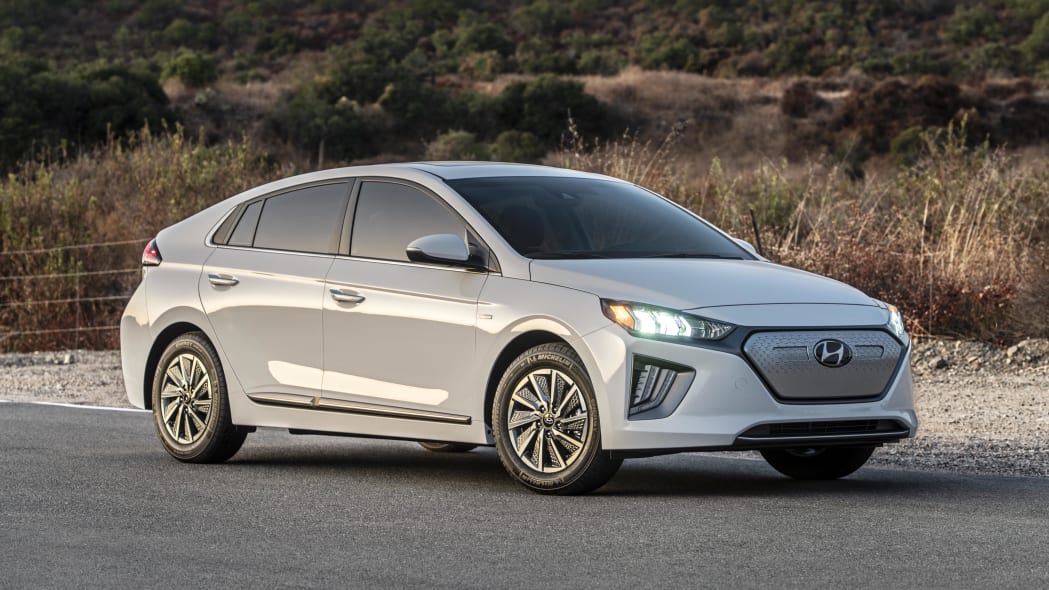 No automaker will address claims by a company it has never heard of about a component it has never used. Still, we wanted to get OEM commentary to compare to Linear Labs’ statements. We contacted Chevrolet, Tesla, and Hyundai. Only Hyundai agreed to a Q&A, connecting us with Jerome Gregeois, a senior manager at a Hyundai Group powertrain facility, and Ryan Miller, the manager for Hyundai’s electrified powertrain development team.

Gregeois said OEMs invest so much in batteries because they’re “so much more expensive than any of the [other] components,” and there’s so much more efficiency to be extracted from battery chemistry. Therefore, “The only way to reach competitive pricing compared to internal combustion engines or hybrids is really to get battery costs lower and lower.”

Concerning motors, Miller said, “Our focus and the industry’s focus on motors has been transitioning to silicon-carbide-based motor inverters.” The motor inverter converts the battery pack’s direct current (DC) into the alternating current (AC) used to power the electric motors that provide drive to the vehicle. Under regenerative braking, the motor inverter does the opposite – turning AC from the motors back into DC to recharge the battery. Silicon carbide technology, which the IEEE called “Smaller, faster, tougher,” is seen as enabling something like a 50% reduction in inverter volume.